The Neoliberal Enclosure of Greek Democracy

Half the challenge is to rip the mask from the face. Now that has happened. After months of the Troika’s unrelenting, unrealistic demands on the Greek people, it has become clear what this conflict is really all about:  maintaining the supremacy of the neoliberal market/state alliance. The Greeks must be punished for wishing to explore serious alternatives.

Creditors, having conveniently socialized their losses through taxpayer-funded bailouts, are now using their hammerlock on state power to keep the lid on neoliberal austerity. That’s their only plan:  their idée fixe. Democracy?  Political stability?  Social or humanitarian need? Secondary details. This negotiation is not about reviving the Greek economy, which has only worsened after five years of enforced fiscal austerity and credit-dependency (which is why it’s absurd to continue with the same policies). It’s about which vision of the future shall prevail.

Syriza, armed with a democratic mandate to reject further bailouts and austerity cuts, is locked in a fierce struggle pitting raw financial power and neoliberal policies against democratic sovereignty and a nascent vision of something better. We know who generally wins such struggles (e.g., Chile in 1973).  Will it be different this time?

A lot rides on whether the Greek people, in the face of desperate circumstances, are willing to stand up to reclaim their self-determination or whether abject realities will simply force them to surrender and become a colony dependent on European creditors.

The Troika surely wants to send a strong cautionary message to the citizens of Spain, Portugal, Italy and other European countries with problematic finances. If that means imposing further unemployment, social disintegration and trauma on the Greeks, without offering a credible plan for the country’s economic revival, the Troika and its European backers are clearly willing to go there.

The Economist magazine captured this insane choice with a darkly humorous cover, “Acropolis Now.” Angela Merkel enters the “heart of darkness” of subduing the Greeks, only to discover the unanticipated costs.  “The horror, the horror.”

Even the Mercenary Trader website (“a community of ruthless profiteers”) seems to have greater awareness of the dire political and social implications here than the Troika.Mercenary Trader writes:

Broken economies and broken dreams are what lead to horrible proposals from wild-eyed fringe leaders (and a populace desperate enough to believe).  This discussion is not academic. The descent of Europe is unfolding before our eyes.

As the UK Guardian recently reported, an estimated 15,000 “pin-striped Nazis” recently held an “evening stroll” in Germany. These protestors carried banners sporting such slogans as “Zero tolerance towards criminal asylum seekers”… “Protect our homeland”… and “Stop the Islamisation.”

This is the ninth week in a row such an event has taken place across East Germany… and the group is growing in size with each “evening stroll”.

The rise in popularity of such groups is hardly unique to Germany. In Greece, the neo-Nazi party “Golden Dawn” has seen its popularity increase. In France it is Marine Le Pen’s “National Front.”

The growing popularity of such groups, though alarming, is hardly surprising. This is because economic hardship brings out the worst in Europe’s general populace. They are angry, they want answers, and they want a scapegoat to pin their problems on. It is an unfortunately common human reaction to a very complex problem. 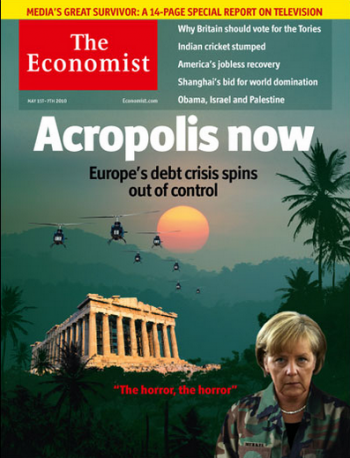 It is remarkable how many prominent economists – Paul Krugman, Joseph Stiglitz, Jeffrey Sachs – are blasting the Troika for their scorched-earth, short-sighted negotiations. To make creditors whole and teach the Greeks a lesson, the Troika is willing to disrupt long-standing geopolitical alliances, fuel the flames of nationalism and political extremism, and let economic chaos descend. Reckless creditors must be paid no matter the collateral costs.

Just as Rumsfield/Cheney in the Bush II Administration promised that a military campaign of “shock and awe” would persuaded Iraqis to immediately surrender, the Troika’s remorseless bullying will likely have similar, unintended effects. It will antagonize and mobilize opposition.  It’s already fanning the resentments of Brits, Spaniards and others who now see the real implications of belonging to the European Union. One can only imagine how British citizens will vote on the referendum on British ties with the EU that Cameron has promised. Brexit, anyone?

Vasilis Kostakis writes that the “real question of the referendum [as] whether Greek citizens approve or disapprove of the enclosure of their commons.” Michel Bauwens has characterized the financial destruction of Greece as “an experiment in active social destruction of all the compromises that have been made since the 19th century.”

The Greeks are not alone, and for a simple reason: the rest of us are also quite vulnerable to being victimized by the ruthless logic of neoliberal austerity policies. (“First they came for the Communists, and then the Socialists, and then the trade unionists, and….”) All of our commons are liable to enclosure if we don’t play by the draconian neoliberal capitalist rules, as enforced by the state and its larger alliances.

So my deep thanks to Syriza and the Greeks for trying to stop the madness. Sunday’s referendum offers a rare opportunity for ordinary Greek citizens to send a message and open up a new path.